Skip to content
We hope you love the products mentioned! For your convenience, our authors added links to our trusted sites like Amazon, and if you choose to make a purchase through the links we may get a small commission at no extra cost to you.
PinterestFacebookEmail

Backyard and camping activities are the ideal scenarios for Solo Stove and Biolite fire pits. While similar, these fire pits have a different ideal user in mind, even if they have some similarities.

Smokeless fire pits are the new norm in camping fire pits or portable fire pits. They essentially eliminate all smoke or nearly all the eliminated smoke of the fire meaning you don’t end up smelling smoky at the end of the day.

Smokeless fire pits such as the Solo Stove and Biolite also have ideal uses in urban settings where a fire without smoke is much appreciated just to not disturb the neighbors when cooking or when enjoying a backyard fire. 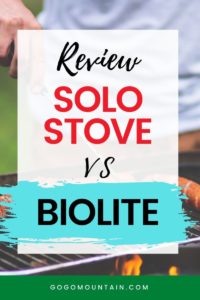 Solo Stove vs Biolite – Which is Best?

Both fire pits are now similarly priced. While the Solo Stove costs more it tends to last longer due to its high performance 304 steel while Biolite tends to be the better choice for those who want to cook on the fire pit first.

These fire pits are ideal for home use and camping use. However, they aren’t the smallest fire pits which means they will take up more space and add more weight to your camping gear. At the same time, they create some of the most beautiful flames seen in the fire pit world which makes them as popular as they are. Here’s how they compare.

You should first decide if you want to cook on your fire pit. This can be a deal-breaker for the Solo Stove which is not made for cooking unless you buy the cooking grate. While you can prepare your favorite marshmallows on the Solo Stove, this fire pit is generally hard to clean. It’s also impossible to recover any food you want to cook if you drop it on the fire.

Biolite comes with a sliding cooking grate. It covers the entire surface of the fire pit and it makes for one of the most practical designs in its class where cooking is important. You can grill all types of vegetables and meats on the Biolite fire pit. One of the main advantages of the system is that it allows grilling without smoke.

Solo Stove has a round design that uses natural air circulation to create smokeless fire. This means the fire pit has its double-wall design which pulls air from below taking it up to the flame through the double walls essentially fueling the fire. This hot air circulation is what burns the smoke of the fire as well.

The BioLite fire pit is made with an 18 x 7.25 grilling area. It uses the same air circulation principles to fuel the fire more and to reduce smoke. However, this is not made through a double-wall design as on the Solo Stove. This is made through technology as it comes with built-in fans. These fans are based on onboard batteries. They are controlled through an app for the ultimate grilling experience.

The battery of the Biolite fire pit also benefits from a built-in solar charging panel. This ensures the battery lasts longer than needed and that it charges efficiently as well. However, since the batteries take around 24 hours to drain, the fans will run for almost any night of grilling or any situation where you need a camping fire for a few hours, even when the flame is burning at full intensity.

The Solo Stove can come with an inner capacity of up to 16.7 cubic feet. Biolite comes with an inner volume of up to 3.6 cubic feet. This means you can put larger pieces of wood on Solo Stove. However, it’s not always best to put too much wood in these fire pits if you’re after the best fire.

Still, Solo Stove comes in a very large volume (as well as in smaller designs) which recommends it as a fire pit for almost any situation. From camping to backyard fires, there are good reasons to see the Solo Stove as the fire pit which has the longest-burning flame since you can fit larger pieces of wood inside.

Biolite is made for grilling first. This means it doesn’t need as much firewood as Solo Stove. You can grill with only a couple of pieces of wood.

Both the Solo Stove and Biolite fire pits are made to run on wood. Charcoal can also be used, especially if you want to grill vegetables or meat. However, the largest flame is seen when using firewood in both these fire pits. This is why they are highly recommended with dry firewood.

Both fire pits are made from stainless steel. However, Solo Stove uses 304 stainless steel, considered superior when it comes to keeping rust away. None of the fire pits are ideal when it comes to storing them outside in the rain. But Biolite’s fire pit is more prone to rust when left outside in the rain compared to Solo Stove.

While both fire pits are portable and easily carried around the yard or the camp, they should be considered by ideal uses. The Solo Stove fire pit is great for backyard fires and for camping fires where there is no cooking or only moderate grilling. Biolite can also be used as a fire pit but it’s mostly an advanced grilling solution with controllable flame through its built-in fans.

Both can be used at home or while camping. To transport these fire pits to camp you need to clean them thoroughly after every use. Biolite is easier to clean after grilling while Solo Stove is sometimes impossible to thoroughly clean if food touches other surfaces than the flame ring or the extra cooktop. Biolite is easy to clean as it used sliding cooking areas.

Solo Stove and Biolite are fire pits for a great smokeless fire or grilling. They intersect in performance in areas such as smokeless design and practicality both at home and while camping. Solo Stove is better for a smokeless fire while Biolite is superior for grilling and preparing large amounts of food.

You can use dry firewood to fuel both these fire pits. Solo Stove is ideal for users who don’t want technology involved in their fire pit which means it’s also ideal for remote use in the outback. Biolite requires batteries and good sunny weather to solar charge these batteries to use its fans. The fire pit can also be used without these fans when the batteries run out. But the lack of air circulation from the fans stops the fire from being smokeless.

Breeo vs Solo Stove – Which is Better?